I made “Do I Exist??” now I’ve made “Do I Exist?”. Totally different question. In this second installation, I removed the filters I used because I wanted to take away the separation between audience and viewer. I’m very pleased with how it came out. I still was unable to prove to myself that I exist, but I had a lot more fun trying with this attempt, which is why I’d say it was successful.

Do I Exist is my 4D Fundamentals final project Part One. Part Two is forthcoming. My goal was to create an audio-video scrapbook which provides a short essay response to the question, “Do I Exist??”. The goal was to convince myself of it, and I’m not sure I succeeded.

I made a T-Rex shaped messenger bag this week because I woke up in a cold sweat wishing I had one. It was the witching hour, so I knew it was a premonition. I made it out of carved foam, then covered it in duck tape and pleather. The strap is an old chain I found. The slot fits two thicc books or six rainbow magic friendship fairy volumes.

This is my lookbook for either the Ghost of Christmas Past, or just a normal festive stylish ghost. He fun to make. I made a really simple red slip and painted the face on (I cannot see inside). The jacket came to be when I found the fabric. It put down roots in my brain and coerced me to buy two yards. It was was much harder to work with than the red ghost sheet. I pretty much made the pattern as I went along, then added the ribbon harness to tighten and loosen the coat. The ribbons weren’t all on correctly in these photos, because I couldn’t see when I put it on. Nevertheless, I love how it turned out. I hope to one day look like this when I am a ghost. 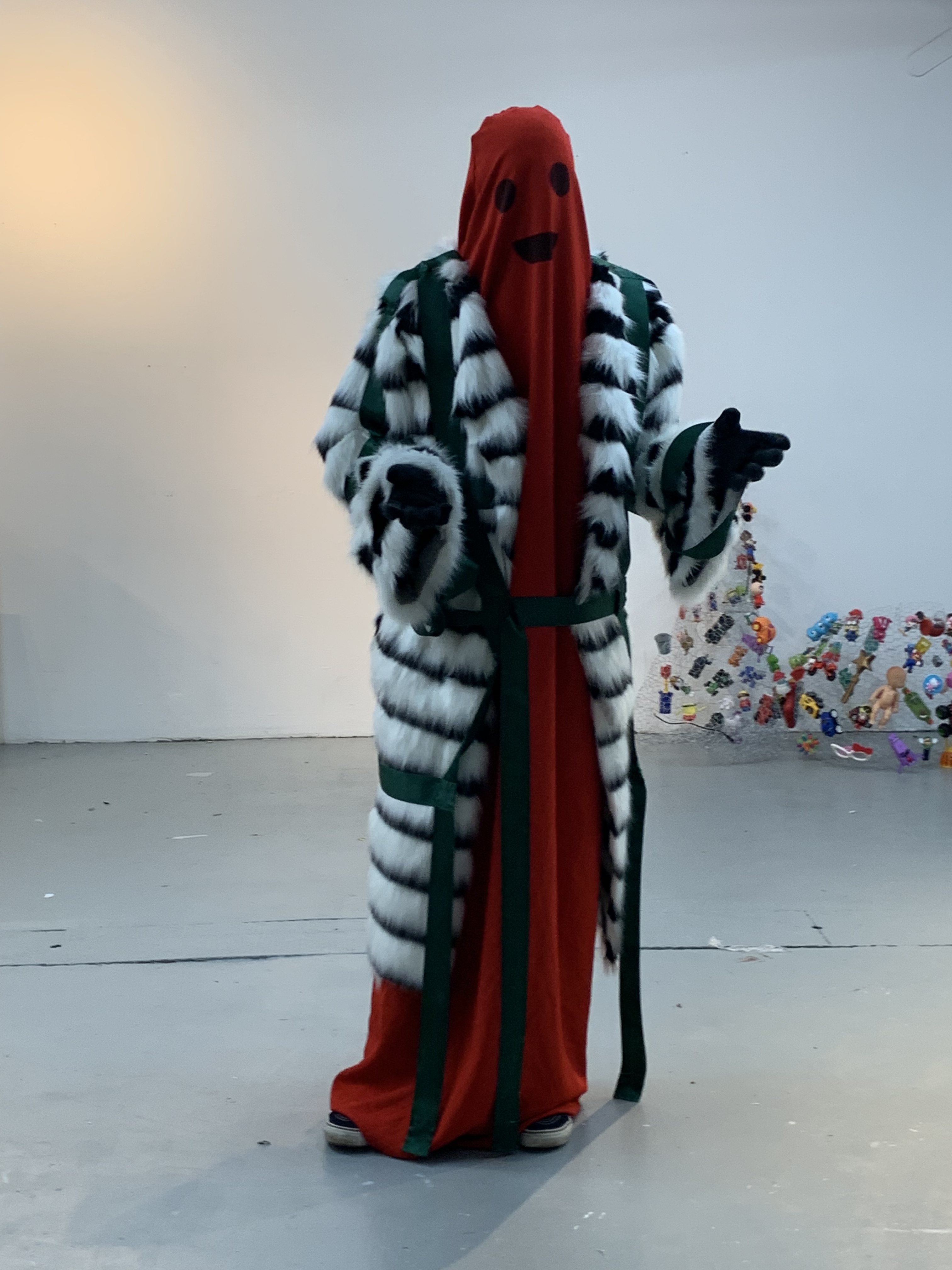 This is my first neon sign! It was damn hard to make. My class really wanted to attach a political message to it, which is their right as observers of art. However, let the record show I owe Texas no ill will.

My train of thought follows thusly: I wanted to create a state outline because I think they’re graphic and patriotic, I landed on Texas for its clout and visual interest. I wanted to flip it backwards to mimic the shape of Australia, so I wrote Au: as an abbreviation in the middle. Why not just make the outline of Australia? As if anyone really knows the shape of Australia off hand. Besides, nothing in art is that straightforward. I chose red neon gas because its the brightest. It looks great in my room and I’m replacing all my lightbulbs with red ones.

And yes there’s a Lime Wire pokin out, he’s my friend 🙂

This was a very big scale project compared to my previous school work. Our assignment was to create a shrine to a found object. I chose a Fender guitar pic, which in my imaginary land saved humanity with the power of music. I made elements of this with ceramics (lil vases inside), wood (general structure), welding and fabric (roof), and acrylic. It was really fun to make this tiny world.

From A to B and Back Again, (named for Warhol’s so-called auto-biography), is the largest collection of Warhol’s work since I believe 1989.

I loved the show. I noticed that my personal favorite Warhol, Silver Car Crash (Double Disaster) was missing from the show, something not surprising as I had actually seen that piece a few weeks previous at the Wadsworth in Hartford. Most notable to me was the portrait room, the mural size works, and the more sculptural displays that showed off such iconic pieces as the brillo boxes. The gallery didn’t have much work to do in the way of a message, Warhol’s philosophy has saturated American minds now, decades later, and his pieces speak for themselves. Any exhibit putting two Warhol’s next to one another would accomplish enough in the way of his philosophy.

The mural size pieces are breathtaking in person, and fantastic feats of painting in my opinion. I wanted a lot more out of the show in terms of 3d displays, Warhol left behind so many artifacts that would have been fascinating to see in person. Overall, the show was clearly more for instagram opportunities and gawking at these massive paintings than actually

It’s not really found footage haha, thats just what we called the project. I teamed up with my friend Mozna and we made this video for class. It’s about surveillance, perspective, technology, and storytelling. Hope ya like it! 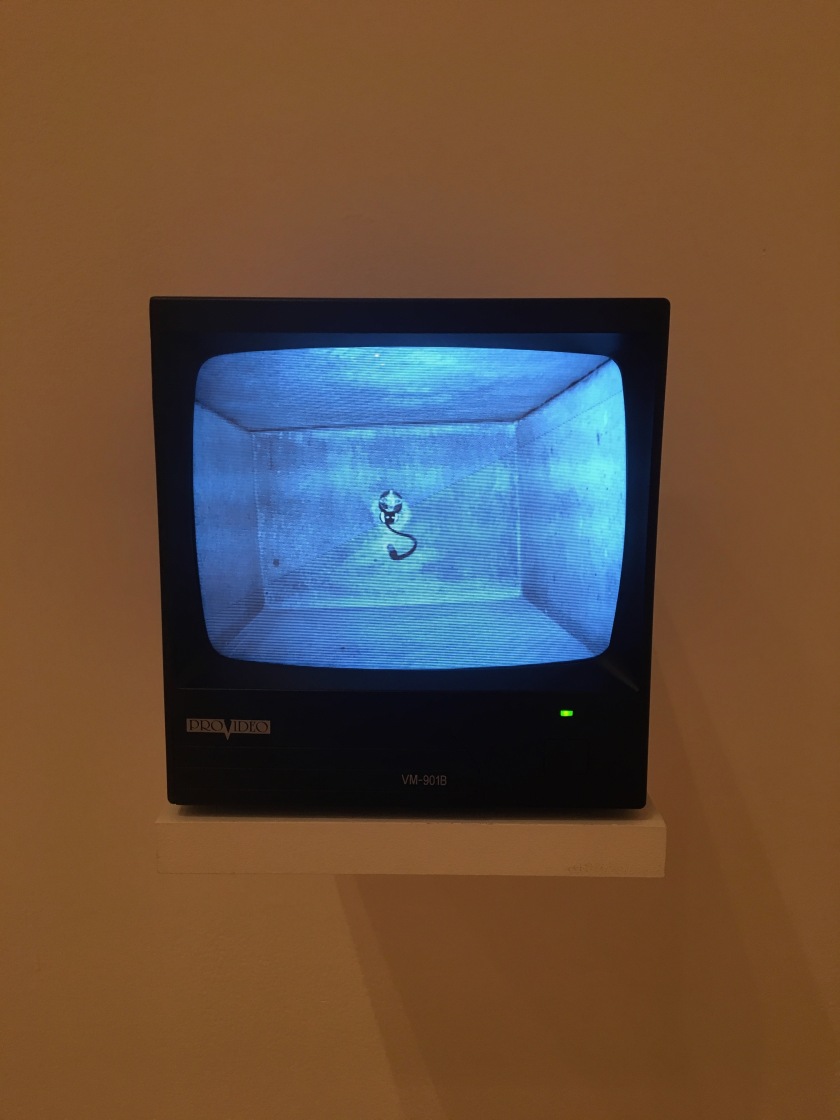 For my 4D class, I took a trip to see Disappearing Acts by Bruce Nauman at MoMA. I found the exhibition to be startling and discomfiting, and walked away deep in thought. Nauman’s work in simple, but not minimalistic. He says exactly what he needs to and nothing more, and often lets his materials do much of the talking. He is more effective in conveying his meaning because of this sparseness. While one may miss his point at first, Nauman is able to guide his viewer to a conclusion with ease, and often this conclusion is unsettling in nature. I found myself feeling completely differently about many pieces after closer examination than I had on just a cursory glance. Upon fully understanding a Nauman work, I often would feel unsettled at his ability to force his viewers mind to go to places it would normally work to avoid. His piece “Audio-Video Underground Chamber” was especially haunting to me. It consisted of a small television on a shelf on the wall, playing a live video feed of an offsite underground chamber. I watched the feed for minutes before reading the description, which gave me the realization that I had been inadvertently projecting my consciousness into “the grave”. To quote Nauman, “To project oneself mentally into the scene is to contemplate the grave”. While Nauman refers to the grave as a “Blank abstraction that never ends”, I was struck by the struggle between this theoretical interpretation of a grave and the very literal finite grave, a place we will all end up and one that is unchanging and eternal. When each and every one of us is laid to rest, we will remain there forever. That spot on earth is unchanging, and to imagine oneself there premature raises all sorts of questions about the nature of death and the infinity that it is. I was also inspired by his work “One Hundred Live and Die”. I am in a projects in glass class where we are learning to make neon signs, so this large scale piece was very inspiring and interesting. His use of not only different colors but variations on live and die, along with the coordinated phrases that strategically lit up in tandem, were fascinating to see, especially knowing how difficult neon is to work with.

These are ceramic lighters, bowls, and cigarettes, strung on yarn. Hand painted, hand everything, this took forever . but in an un-obtrusive way. Meaning, I worked for like a month on this, but only for about thirty minutes every few days. #slavetothefiringschedule 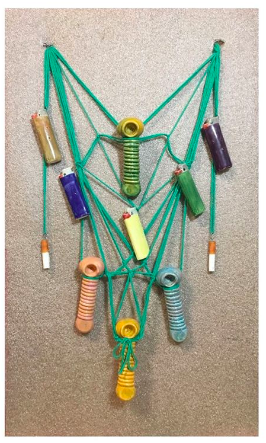 This is a faux painting kit I made for my 2d class.

I constructed the box out of cardboard and painted acrylic and paint marker on foam core to create the demo piece. It can be totally reconstructed following the (somewhat convoluted) instructions in the bottom right corner.

I made a postcard 🙂 It was hard to think of an idea cause there’s just endless possibilities on photoshop, but once i got it it was really fun and I love the result.